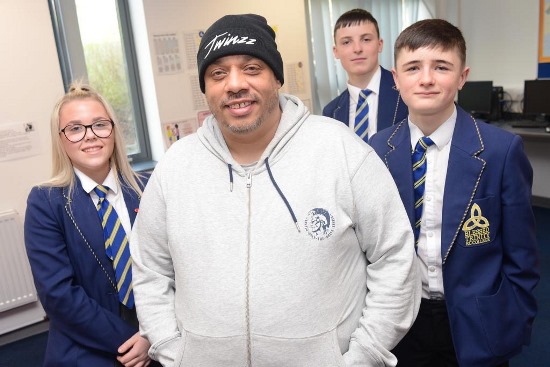 A former gang member has been talking to pupils at Blessed Trinity Roman Catholic College about gang culture and youth offending.

Darryl Laycock belonged to a gang in Moss Side in Manchester, was shot more than 20 times and also stabbed, and spent 12 years in prison for serious offences.

He was released in 2011 and vowed to turn his life around for his family and now he speaks to pupils about his life and uses his experiences to help others make the right decisions.

Daryll appeared in the Batfa award-winning Gun No 6 and has also been an adviser to HRH Prince Charles on knife crime prevention and reduction. He also works for a host of agencies and has had his work highlighted by the Home Office.

“I do workshops and mentor pupils, I talk about my life but it’s not about me, it’s about them and empowering them to make the right choices in life,” said Daryll.

“I use my past to talk to groups and individuals and offer them advice and hopefully help them take the right path.

“I was shot at, stabbed and spent 12 years in jails around the UK. I turned my life around when I came out and now I reach out to around 190,000 people in the North-West and try and help them.

“I talk about knife crime, gangs and life in prison and the mistakes I made in the hope people won’t repeat them. I want to be a positive role model for them.”

Assistant Headteacher Mrs Nolan said: “The pupils have really responded to Daryll, they listen to him and get a lot out of their sessions with him. He connects with them and talks passionately about his life.

“As a school, we are following the national programme of knife crime prevention and helping our children make the right choices.”