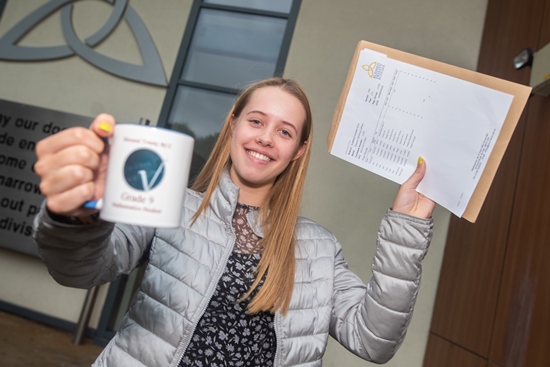 Eleanor Latham was on Cloud Nine after achieving a magnificent nine Grade 9’s in her GCSE results and an 8.

Students achieved 12 Grade 9s in Religious Studies, 10 in History and nine in English, among others.

“We are thrilled with the achievement of all of our pupils especially those gained by our most able pupils,” said Mr Varey.

“We were strong in English, Religious Studies, History and Spanish especially.

“One in five grades are a Grade 7 or above and it is testament to the hard work of the staff and the pupils.”

Eleanor, the Deputy Head Girl last year, admitted it was a lot to take in.

“I am shocked and overwhelmed to be honest,” she said. “I have done much better than I expected.”

Eleanor has been a star at Blessed Trinity, winning a national award in public speaking when she was 14 from the English Speaking Board.

She was one of just five students around the country to receive ESB’s highest commendation of Young Speaker of the Year.

However Eleanor’s future lies in Maths.

“I want to study Maths at university, I like problem solving.”

Dancer Eleanor has embraced school life, taking part in all the shows including Bugsy Malone, Oliver and Grease.

“Dancing has always been my hobby but Blessed Trinity has allowed me to do it all – academic competitions, sports and shows.” 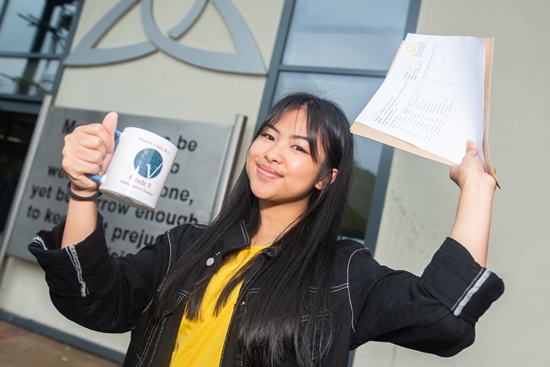 Nadine was also celebrating as she achieved seven 9s and four 8s in her GCSE results and will now go onto Nelson and Colne College.

“I am so pleased,” said Nadine. “I want to study Computer Science and Maths at A-Level and do something with them in the future.” 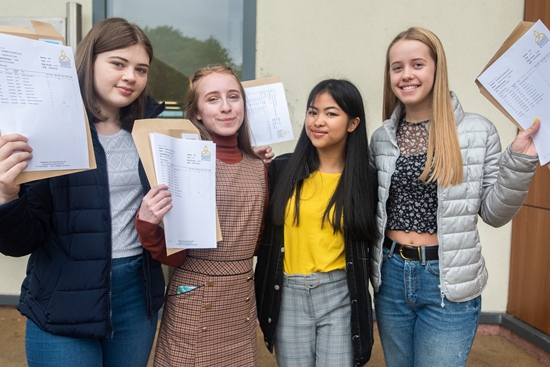 Mya waltzed her way to success as she got two Grade 9s in History and Dance as well as three 8s, four 7s and two 6s.

“I have cried as I am so shocked at how well I have done,” said Mya, who hopes to go to Clitheroe Grammar School to study Religious Studies, Maths, Drama and Psychology. 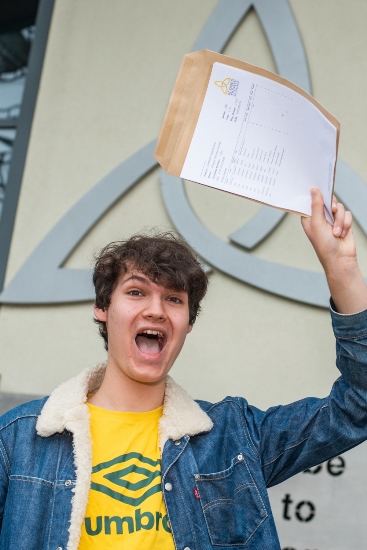 Greg hopes to hit the right notes when he takes an A-Level in Music, among others.

Greg achieved a Grade 9, five 8s and three 7s in his GCSE results and said: “I am happy, I got the results I needed for sixth form so I am really pleased.”

Greg has acted and sung in all Blessed Trinity’s impressive shows, including Bugsy. Oliver, Grease and was the only Year 11 who starred in July’s production of Annie.

“My priority is A-Level Music and so I am going to  BRGS, who have just had an extension to their music department and have the same software we use at Blessed Trinity.

“I will study English Literature and Religious Studies A-Levels as well.

“It’s been great to be involved in all the shows. I have been a member of Burnley Youth Theatre since I was 10-years-old and the Performing Arts Department and Music Departments are really strong at Blessed Trinity.

Greg, along with fellow Y11 students Will Fort, Olivia Kelly and Year Nine Jimmy Fort, is in a band called ‘The Cards.’ 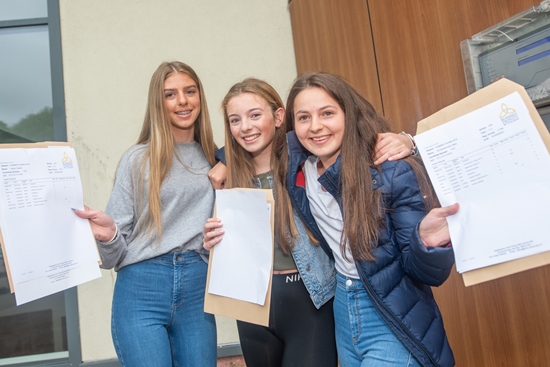 Annabelle is a big hit in the cricketing world and hopes to combine her love of science and sport in her future career.

Annabelle secured a Grade 9 in science and three 8s among her successful results.

Lowerhouse Cricket Club wicket keeper and batsman Annabelle has played for Lancashire at Under 13 and Under 15 level and has just been selected to play for her county with the Under 17s.

“I got involved in cricket through my brother and my uncle. I just enjoy it and it’s so satisfying when we win and play well.

“My aim is to play for England, with my favourite player Charlotte Edwards.”

Annabelle has her sights set on going to St Christopher’s.

“I want to study A-Levels in Biology, Chemistry, Religious Studies and PE. I want to be a nutritionist, combining science and sport and this united them both." 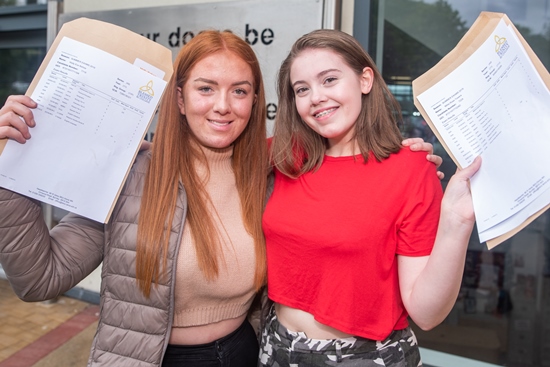 Holly has been an all-rounder at Blessed Trinity – and has earned a prestigious scholarship.

Holly has been offered a scholarship at Stonyhurst College to study Biology and Maths.

“It was tough as I had to do some on-line tests, an interview and then an exam in both subjects,” said Holly. “I went into it open-minded so I was surprised when I got an offer.

“I hope to study A-Levels in Biology, Chemistry, Maths and Psychology.

“I want to study medicine at Imperial College in London as I want to be a paediatrician. I am not sure what I will specialise in but I want to work with children.”

Holly has starred at netball at Blessed Trinity, playing regularly for Lancashire at Goal Defence or Goalkeeper.

“The next step is to attend trials for Manchester Thunder which is something I will look into.” 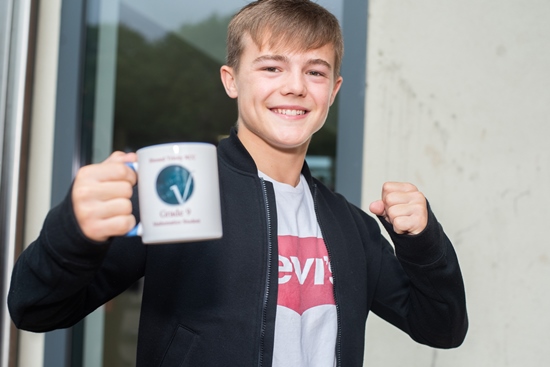 Edward is an England judo star but his ultimate aim is to work with computers.

Edward has been a member of Bacup Judo Club for many years and picked up a silver medal in the National Under 50kg category at Birmingham recently.

He will go to the Commonwealth Games in Birmingham later this year representing Team GB in the Under 60kg Junior and Cadets.

He has been called up to the last three England squads and has competed all over Europe.

“I started when I was five since my dad’s friend encouraged me to have a go and I have enjoyed competing at a high level.”

Away from judo, Edwards is hoping to study Maths, Further Maths, Physics and computing at Burnley College and celebrated a top Grade 9 in his Maths.

“I want to do something with computers and maybe study physics at university. I will just see where it takes me.” 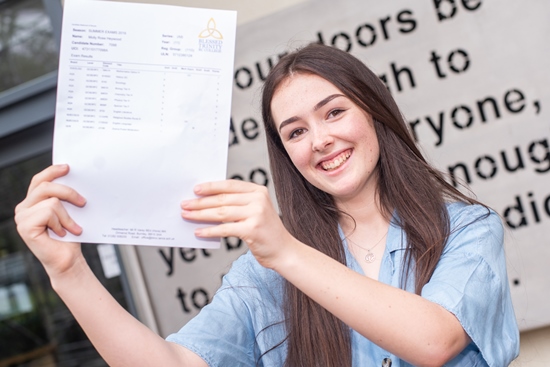 Molly was delighted with her two Grade 9s - in History and English Literature.

She also achieved two Grade 8s along with three Grade 7s in her 11 passess.

"I want to go onto Bacup and Rawtenstall Grammar School and study History, English Literature, Sociology and Psychology." 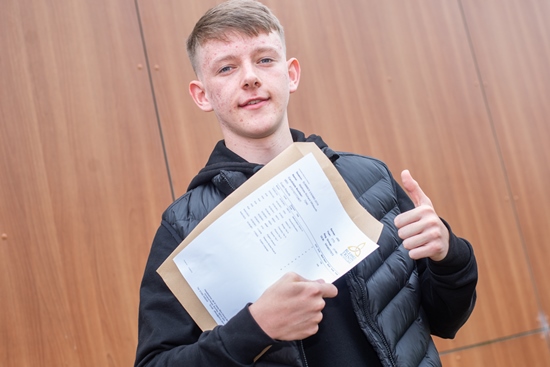 Head Boy Matthew achieved 10 passes of Grade 4 and above and will now go onto Burnley College.

"I want to do something sports related," said Matthew who plays for Padiham Youth Team. "I will study PE, Maths and Psychology and maybe do something with Sports Science in the future." 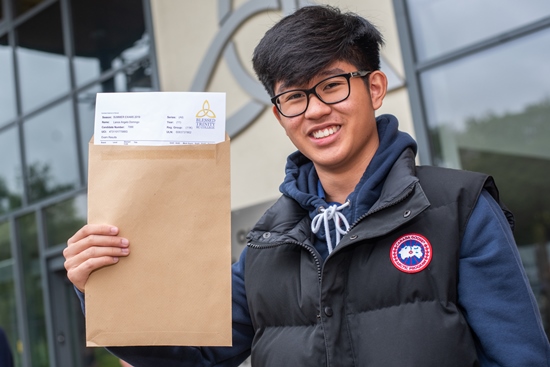 Lance was in tune as he achieved a Grade 9 in his Music.

Lance plays the piano and will take his Grade 8 test this year - the highest you can achieve.

He also got four Grade 8s and three Grade 7s among his GCSE results.

"I will go to Nelson and Colne College to study Maths, Chemistry and Biology and do something with science in the future."